The Kaitlyn Moe Rosensteel Scholarship Foundation annual Moe Rosensteel Memorial Kickoff Classic is another way to honor Moe and continue to support and recognize the young ladies who play soccer in our region.

The Moe Rosensteel Memorial Kickoff Classic is an exciting event that showcases teams and players, along with their talent. It’s a day of fun and a celebration of the game. No matter what it was, Moe found a way to make things fun. This event brings that same spirit and energy to everyone involved. There are great competitive games, music, food and, most of all, fun for everyone.

We want to thank Michael Burrell, Norwin Athletic Director, for being part of our inaugural event and helping to organize this great day. We also want to thank our committee and board who has put a lot of time and effort into making one of our first missions come to life in honor of Moe.

The inaugural Moe Rosensteel Memorial Kickoff Classic took place Saturday, September 4, 2022. The annual event is to honor the late Kaitlyn “Moe” Rosensteel who passed tragically June 13, 2019. Six teams that had a connection to Moe and/or the Rosensteel family were invited to participate.

The event was held at Norwin High School Stadium and hosted three games. The first game would pit Moe’s high school team, Ringgold, against Hickory from Hermitage, PA. Ringgold would be victorious 1-0.

The final match saw the host, Norwin, take on former section rival, Greater Latrobe. A very hard-fought battle worthy of the definition of “rivalry,” saw the two teams go through two overtimes and come to a 2-2 draw.

Each match had two Players of the Match awarded from each team. Game one saw Daisy Rust of Hickory and Aubrey Esper of Ringgold receive the honor. Game two Player of the Match honors were shared with Bella Vozar from Thomas Jefferson and Mauriana Dorsch of Franklin Regional. Our final game honorees were Norwin’s Nicole Brown and Latrobe’s Robin Reilly.

After the awards were presented, a little fun followed as the awardees shot T-shirts into the stands towards their teammates and team supporters.

The day would see over 600 people come through the gates of Norwin High School Stadium. They enjoyed music played by DJ Philly Bob, food by Peroney Bros. Pizza and Rocket Popcorn. There was apparel and team photos from Pay2Wear and Photo Guyz. More importantly, the players competed and had smiles on their faces as they walked off the field.

The foundation wants to thank the players, coaches, trainers, families, supporters, and volunteers. Without them, the event cannot happen and help raise money towards the Kaitlyn “Moe” Rosensteel Scholarship.

Special thanks goes to Mike Burrell, Norwin’s Athletic Director. Mike and his staff opened their facilities to our foundation and provided the best accommodations one could ask for. We are grateful to Mike and the Norwin community for supporting us.

We would like to thank Crumbl Cookies and the Ornowski family for being our title sponsors. Our event doesn’t run the same or succeed without their commitment to our event. Thank from the Foundation and the Rosensteel family.

Thank you to the Latrobe Girl’s Soccer program for a wonderful donation and being part of Moe Rosensteel Memorial Kickoff Classic. 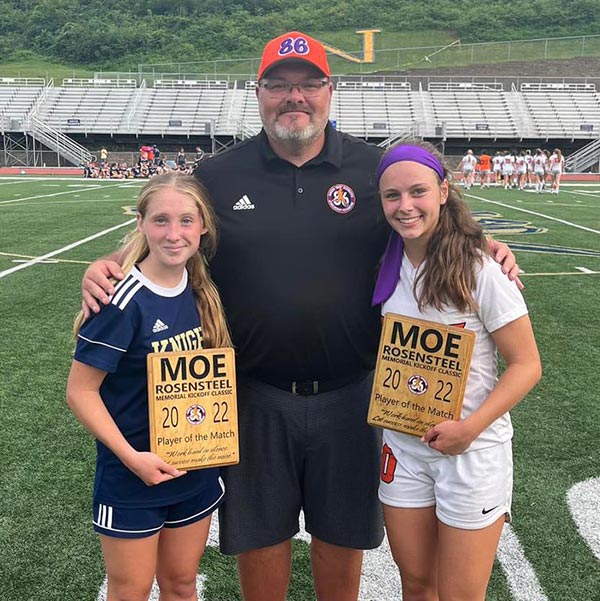 This is the best way to stay updated and learn about opportunities to get involved.